With Journaling Woman everything begins for her with a tiny idea and then balloons. What seems like innocent and simple tasks, JW usually turns into an ordeal of some kind. And so it was beginning with this lamp and how she (likes to call it) was trapped for hours. Okay Okay – it was approximately 60 seconds. But, it started with this lamp. 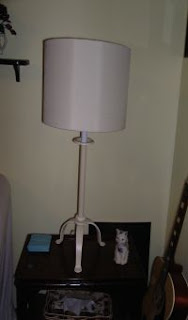 JW likes to buy used when she can; her way of helping the earth. While shopping with Lovely Daughter at a Goodwill Store, she found the lamp for $5. As they shopped the store, JW kept looking over at the lamp on the shelf. The lampshade was still wrapped. Seemed to be new. JW bought it. But back at home, it didn’t match the brass floor lamp. Floor lamps can be costly. So Journaling Woman set out, like she always does, to make it work. She would make the old brass floor lamp match the new lamp with good ole spray paint. Now she needs to find a lampshade. Here they are, you decide if JW had a good idea or not. Really, it will be better. 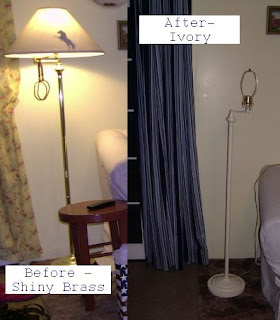 But how did she get trapped, you ask? Well JW had to unplug the lamp from the outlet behind the couch. Like always, she did “it” too fast and stuck her arm back there without thinking. Arms are not necessarily like cat's heads you know, if a cat's head can fit through an opening, they say their body will probably also fit through. Not so on arms stuck behind couches. Did you know that when you lean against a couch it pushes to the back of the couch closer to the wall? Which is where JW’s arm was, behind her couch. Panic set in. Journaling Woman was in a pickle, she couldn’t pull her body back, because her arm was up to its armpit and pushed way down I mean way down behind the couch, and her arm would not slip back out. When she tried to force it out, it hurt greatly. Lassie could have been helped, but alas JW has no Lassie, just The China Cat. JW did yell at China Cat go get help. (Yes JW she did that) But all CC could do was scream at her in a hysterical cat cry. Very annoying by the way. Finally, JW freed herself with brilliant thinking
Email Post
Labels: JW As Handy Woman