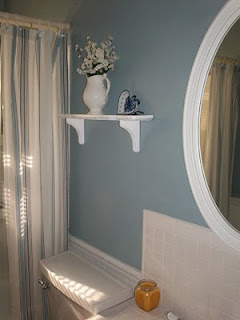 I wanted to show you all the new color of my main bath. I painted it before Christmas and put up the little shelf. The color may look blue, but it's gray. I love it!

And the white against it...ahh!

I'm at a loss on what to talk about lately on the blog. So, I thought I would tell  bore you about with one dark and stormy night.... Ok, it wasn't stormy, and it was nearly morning, and as you will read it wasn't really even dark.

One early Saturday morning, I awoke at 3:15. Saturdays should be for sleeping, not waking early. I was aggravated and decided to lay there hoping I would go back to sleep. Finally, around 4am I turned on the TV and watched the last 30 minutes of a movie, The Day after Tomorrow. Maybe it was the mood of the movie and the desperation, but it did not lull me back to sleep. Instead, I became very jumpy and tense from the big ole wolves who were trying to kill the survivors.

Then I heard a noise.

I muted the TV, but heard nothing. I figured I was “hearing” things. You know my imagination. The next time I heard the noise it sounded like it was just outside my bedroom window. At first it was a coo, kinda sorta sounded like a Mourning Dove, but I’ve never heard their call at night. I’m not saying they don’t call at night.

Then I heard it again.

At some point, my thought went to the possibility of the “call” being an owl. Although I am an expert on PBS, I’m not so much on the calls of owls. And it didn’t sound like any owl I had ever heard.

Then I thought about a coyote. We have coyotes.

Being the scaredy cat that I am I became a frozen lump of human in my bed. The vocalization escalated to a high pitch AND then in the distance…was answered.

Whatever was outside my window was screaming like a monkey or a hyena, but nothing like I had ever heard in MO. Perhaps something had escaped, something from another land. I promise…it sounded like monkeys or… hyenas or monkey hyenas. OR werewolves.

If you were here I would imitate the sounds and totally embarrass myself, but at least you would know. They were screams I tell you.

I needed to see what was going on outside the window and quickly defrosted my frozen body to have a look. I was hoping it wasn’t werewolves. I DON’T think they are cute at all and would never want one as a pet.

I tried to peek around the side of the shade. I couldn’t see out, so I went to a bedroom next to mine. There was a full moon. No one had warned me of this. I could see everything in detail and I was certainly hoping I didn’t…see everything…in detail. And there it was beneath my spare bedroom window-- a slobbering hairy mass of fur that jumped straight off the ground and hit my window. It WAS a werewolf. Wait… it wasn’t a werewolf. I just wanted to see if you were still with me.

I didn’t see anything, but I think it was an owl. I went online to enature.com to see if I could find a Missouri owl that sounded like what I had heard. I don’t recommend doing this when at four in the morning. The owl screeches brought me right out of my chair.

It might have been a spotted owl or an Eastern Screech owl.

I heard it again a couple of weeks after that. I told this story to my son on Christmas day. He said he thought it was an owl and told of his encounter of an owl flying over the cab of his truck and in front of him on the road. He lives near me.

My daughter stayed here over the weekend. She heard it too and was creeped out. I was creeped out again myself. I told her not to worry, it wasn’t monkeys, hyenas or werewolves--only an owl. I think.