This is the story of one of my favorite friends. She was wild and unpredictable, and sometimes destructive, but I loved her very much. Her name was Chloe’ and she was my Maine Coon/Alley cat, but more than that sh 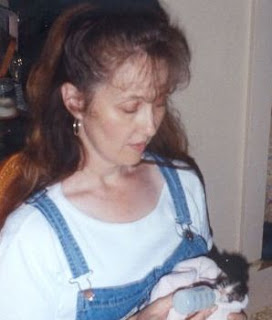 e was a piece of my heart. I never thought that any pet I could ever have would touch my heart so deeply and never let go. This is how the story goes.

It was June 1 (1997) and hot. With the help of my teenage son, I was cleaning my backyard, carrying limbs from one part to another. I had walked past a stack of old fence posts several times- a burn pile for later. At some point, I glanced over at those posts and remembered seeing a black spot high up on one of them. I walked on a step or two, but then stopped and went back. Suddenly, the shadowy spot turned into a baby kitten. I called my son over. I don’t think he could believe it either. Then I discovered that a feral cat had given birth to some kittens somewhere under that pile of posts. So, I tried several times to put the lost kitten back in the nest. Well, it just didn’t work out. And frankly, the only way that kitten could have reached that spot, was if something carried her there –perhaps her mom. Finally, I cradled the little kitten, whose eyes were closed, in my hand and took it in the house. I was pretty certain the kitten was no more than a day old. This was confirmed ten days later when her eyes opened. I showed my daughter the new kitten and she guessed it was a hamster. No, it was a fuzzy black and white kitten. I didn’t take any photos of the kitten in those early days, because honestly she was so young I thought she would die, and I didn’t want pictures to remind me.

Both children asked, were we keeping the kitten? I said over and over, “The kitty won’t live, she’s too young, don’t get attached.” And later when she didn’t die I said, “If she does live we have to find her a home, I don’t want an indoor cat.” And so it began an interesting journey with Chloe’.

The first week the kitten had many names, none of which were appropriate. I shared with everyone at work and my neighbors that I would have a kitten to give away soon. As days went by and with her eyes open, I was very thrilled that I had done such a great thing to keep her alive. She flourished on the milk replacement diet. She grew fast and was strong. I would wrap her tiny body in little blankets as I fed her a bottle. That part was for me.

She was brilliant from the start- I kid you not. She litter trained herself with in the first 2-3 weeks. I certainly didn’t show her how. Also, during that time she became Chloe’ Mahoney. Trust me; she needed a middle name so we could use it over and over and over again to scold her.

During the first couple of weeks, she slept next to my bed in a basket and then graduated to a box. One night, I woke up thinking I had heard a tiny little cough. The next morning, I heard it again. I went to work that day worrying about her, called my mother (mother’s are great aren’t they). She told me to call the vet. After work I took her to see the vet; Chloe’ had pneumonia. The vet was amazed I had heard the cough. I was her mother after all, right? Didn’t realize up until then the hold she had on me. I stopped asking people to take her.

Chloe’ grew up spoiled (sorry about that) and so ornery. She couldn’t help it, I tell you. She wanted to be good. Yeah right. There was more spirit in her than 100 cats combined. A lovely free spirit. The black and white cat turned into a beauty. And she thought so too. She would constantly sit in front of a mirror- any mirror looking at herself. Then abruptly she would turn and watch her plume of a tail fan out in the air, as she walked away. She also had a temper. She would seek and destroy.
And-
Left gouges in the drywall
Scratches on the trim
Marks on the tables
Then cleared those tables
Broke anything that would break
Bit her family on a whim
Scratched you with delight
Tempted strangers to touch her
Then nailed them.
But Chloe’ loved her family deeply. I knew it. I felt it. I never ever 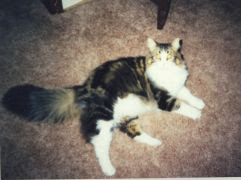 thought she considered herself a cat. She would knock on my daughter’s door scolding her to get up for school. She was a great alarm cat or an annoying furry sister. She showed her special kind of love to my son by chasing him, grabbing his legs and biting. I can still hear him yell, “Chloe’.” I think he loved her too, pain and all. Chloe’ would be there when you awoke from a nap, right in your face staring at you. She would follow like a dog and then chase you like a demon. But, she stayed close when you cried, because she loved her family deeply and – we loved her 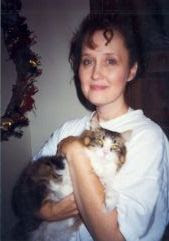 Suddenly, at seven years old, she got sick. I didn’t want her to suffer, so I had to make that ole decision that we hate to make, to have the vet take her to an eternal sleep. Sometimes I hear her special gurgling call for me and wish she were back just so I could peel her off the walls again or ruin vacuum cleaners with her hair. People have come and gone in my life, but it might just be Chloe’ that I miss the most.