She Named Him Bunny

Growing up country for a child in the 1960's meant using our imagination - a lot. TV wasn't a big part of our lives, so we made friends with our siblings, cousins, neighbor children, and with the animals of our world. Cows, horses, dogs, cats, you name it, a kid growing up country had more than one furry or feathered friend.

During one of those times, my childhood best friend found a baby rabbit and took it in and bottle fed it until it could eat on its own. She loved that baby rabbit so much. She named him Bunny. Sorry did you think it was going to be something else? She petted him, talked to him, cared for him and loved him dearly. She wrapped him in a blanket. Then Bunny became tame. He learned to come to her when she called, and ate food from her hand. He lived in a box in her family's kitchen. I even petted him. Clearly, Bunny was a spoiled wabbit. One day when he was two or three months old, she accidentally left the kitchen door open as she went outside. Bunny jumped out of his box and out of the door. Lickedy split. I think that's wabbit talk. Then, he paused briefly on the porch looking around. My friend cried out to him, I mean cried (I may be making that up, see Liar, Liar for reference.) He took one last look at her and hopped away as fast as his wabbit (sorry- last time) feet could take him into the woods, beyond the house. She called for him. She cried after him. She searched. But, she never saw him again. Now, wipe those eyes. This is really a happy ending because Bunny was where he belonged, back in the woods.

I loved our farm animals. I never did harm to any pet of mine – well except for the tadpoles I might have put in a coffee can thinking they would turn into frogs the next day. NOBODY TOLD ME to put water in with them. 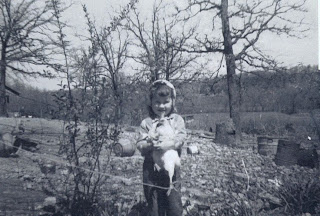 This is a chicken that my Grandma Maternal tied up for me at her house, so that I could have a chicken pet. Now don't go calling the ASPCA or PETA. I didn't hurt the hen. In fact I loved her, I hope you can see that on her face, how loved she felt - well until - I won't finish the sentence.