Today's post is an interview with my dad. I thought it appropriate because of Father's Day yesterday and because he has written and self-published his fourth book, Life Along the Dousenberry. The book chronicles the adventures of a young boy, his family and friends in the 1940's.

I would like to welcome today my dad, Ronnie Powell. I have asked him a few questions that I have pondered about his artsy side and thought you might like to see his answers too.

Me: You have many creative outlets. Do you have a favorite?

Ronnie: I have no actual favorite. An idea and or a plan may awaken me or catch my eye and go from there. The Tiddleson book was inspired by a lizard running from an old rusty coffee can and several years passed before it materialized. The idea for the book A Stranger in London Smoke came from an account told to me by an old man who as a boy had watched a stranger ride into London Smoke one day, around the turn of the century. Several of my paintings and woodcarvings were inspired by my interest in history and or a particular person. With the exception of writing (editing mandatory), my interpretations are as I see them.

What inspires you to write, paint, or carve?

As a boy writing, for a time, was a way to communicate without humiliation and interruptions. Later, I wrote stories by the dozens and hid them in the woods or gave them to one of my teachers. Woodcarving was a necessity for making toys. Painting came much later when an aunt gave me several tubes of oil paints and I discovered a beautiful way to create.

As a child, who was your favorite author ?

Jack London. He made it possible for me to lose myself in the wilderness, far away from people. He helped me learn to tolerate my fellow human beings.

At what age did you decide to write stories?

I would say about the age of nine.

How do you begin your writing process? Do you outline or start writing?

I usually begin with notes tucking them away in a pocket to later place them in a safe place. When I feel as if the story is secure I start writing, and often discard many of the notes.

Where do you get your ideas?

Ideas have originated from particular people, an old Indian man I once knew, for instance.

My book The Imitators (unpublished as yet) was inspired by the sighting of a mysterious flying vessel over Bennett Springs State Park. It was an event that excited my curiosity considerably.

When Butcher Redoak fell in the last gunfight at Prairie Days (This was a yearly family festival at a museum site. Butcher Redoak was a character in one of the reenactments. ) he came alive in story.

I did not want a generic cover, but opted for designing my own creation and that was the most difficult aspect of self publishing for me.  However, the designs have become the perfect container for the books.

The best part of self publishing is to open the first copy and see your work in print and not to be concerned about fame or fortune, but rather to share your work with others. The newest book  Life Along the Dousinberry, I discovered, was for me to revisit and recall times past untainted by reality. I also discovered many readers who opened the book and found their own recollections. 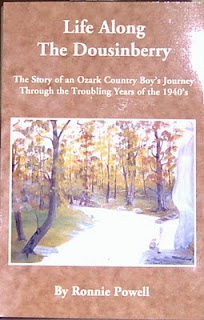 Thank you, Dad Ronnie, for coming aboard today at Journaling Woman. Here is an excerpt from the book Life Along the Dousinberry (which I typed very fast).
Chapter One
During the afternoon hours of a noteworthy Saturday afternoon in the month of June, 1945, two vigilantes slip quietly into a brush thicket at the base of Brushy Ridge Hill in the Missouri Ozarks. The intent of these fellows was not complicated, for they were on the trail of cattle rustlers. Their pistols were of cast metal, one being endorsed by Lash Lurue, the other by Hop-Along Cassidy. The taller of the vigilantes, Ronnie Shannon, was a fair lad of nine years with shaggy red hair and freckles sprinkled over most of his face and clothed in ragged overalls, no shirt or shoes and frayed straw hat. He sat astride a black stallion stick horse fashioned from a broom handle.
Chapter One - Hombres on the Trail, Chapter Two- Skinny dipping... Chapter Nine- A Rooster Gone Bad...Chapter 13- City Cousin... Chapter 15- A Clatter in the Night.
If you would like to see his woodcarvings or paintings you can see them at his website. He also has a blog South Through Barefoot Pass.  If you have any questions for him you can email him at captredoak(at)centurytel(dot)net. He will be happy to talk with you.
And when you get an extra minute and you would like to read a little more about my dad,  from my perspective, you can see what I had to say on my rural blog Saturday. I mean it's worth it just to see what a cute baby I was and how he looked like James Dean in the photo. It's a wonders we didn't head straight to Hollywood.
Thanks for dropping by.
Email Post
Labels: JW Randomly Speaks JW's Family