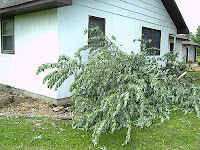 That day when evening came, he said to his disciples, "Let us go over to the other side." Leaving the crowd behind, they took him along, just as he was, in the boat. There were also other boats with him. A furious squall came up, and the waves broke over the boat, so that it was nearly swamped. Jesus was in the stern, sleeping on a cushion. The disciples woke him and said to him, "Teacher, don't you care if we drown?"

He got up, rebuked the wind and said to the waves, "Quiet! Be still!" Then the wind died down and it was completely calm.

He said to his disciples, "Why are you so afraid? Do you still have no faith?"


JW's thoughts:
Spring and summer brings stormy weather to MO. The fact is we have our share of tornadoes and straight line winds. One thing I know about a "good" storm is it creates fear.

We also experience various storms in our own lives.

I like being in control, and, yet I am rarely in complete control of anything. When I was led to this scripture this week, I knew God was telling me something. He knew I had decisions to make. He knows how fear sets the stage for my decision making.

How often do we say, Jesus wake up and take care of me?  Where are you? I am afraid. Don't you care? Eventually in his timing, he will say with authority to our storms, "Quiet! Be still!"

-An entire family who lost their 11 year old boy to cancer.

-Karen whose middle brother fell from a ladder last week, fractured his skull and died and whose oldest brother (I just found out) died last June.