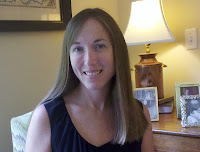 I could not proceed with Friday’s Interesting People without one of my favorite cozy writers guesting here. I am thrilled to welcome the lovely and most talented author Elizabeth Craig to FIP.


Elizabeth is a writer of several cozy mysteries with her latest book, Quilt or Innocence, released June 5, 2012.

Elizabeth: If I had to write another mystery subgenre, then I’d choose police procedurals.  But if I chose a totally different genre, I’d like to try historical family sagas or middle-grade fantasy.


JW: You are a talented writer and not because I say so, but because you are. Do you have other talents? What are they? And don’t be modest.
Elizabeth: I don’t do anything as well as I write, and in that respect, I’m a one-trick pony (although it’s a good trick!) Other than that—I’m good at learning languages, I guess.  I took years of Latin and French. I’m a good mom, most of the time.  I’m very good at being punctual and I’m pretty organized.


JW: Remember back to the first time you had a book published, how did that feel? Does it still feel awesome or like old news?
Elizabeth: It still feels awesome because it was tinged with that element of sheer luck and luck feels like magic. That’s because it was a slush pile book and through the years I’ve realized how much luck played into that book being picked up. I’m not sure I really realized that at the time.


JW: I know you’ve told me before but please tell me again, what is your daily writing schedule like?
﻿
Elizabeth: During the school year, I get up before five a.m. and write.  I usually get about 2 pages done before 5:30 a.m.  Then I do promo-related writing and promo activities (mostly scheduling Twitter and responding to different emails) until lunchtime (and I also do housework and stuff like that then.)  At 1:45 I sit in the high school carpool line and write for another 30 minutes, finishing another 1.5 pages. Once the kids are home, I’m basically done for the day.  In the summer, I still write first thing and I still break my writing sessions in half with an early-afternoon second session.
JW: What are you working on right now? Do you have approximate release dates?


Elizabeth: Right now I’m frantically working to finish the 4th Memphis Barbeque book, due July 1. I’m editing it now and want to add in another subplot.  That book should come out in early summer 2013.
JW: As a child, did you have a dog, a cat or an imaginary friend? Did you name any of them?


Elizabeth: Through the years, I had dogs Penny, Cleo, and Snuffy.  I had cats Snowy, Tar Baby, Harriet, and Ben. Tar Baby was a favorite.  My imaginary friend was an alter ego of mine, Super E. Super E could fly, lived inside a tree, and could be invisible. Being invisible was something I really liked the idea of!
JW: Were you as a child: a. Loner b. Leader c. Bossy d. Follower e. Shy


Elizabeth: a. I’ve never been shy, but I’ve always been a loner. I’ve always liked watching other people/activities instead of joining in.
JW: What did you believe, as a child, that you found out later was not correct?


Elizabeth: I believed if I threw sand into the ocean, the waves would get bigger. J
JW: What was your favorite book or author when you were in grade school?


Elizabeth: My favorite series were Nancy Drew and Trixie Belden (no surprises there!)
JW: Here are a few random questions for you. Let’s start with, what are you reading right now?


Elizabeth: Right now, I’m reading House of Silence by Linda Gillard.
JW: Do you have neat handwriting or “I should have been a physician” handwriting? My handwriting is a disaster!


Elizabeth: When I sign books, I’m particularly embarrassed. I always got bad grades in handwriting.
JW: Coffee, Tea, both or neither? Coffee!


Elizabeth: I like tea, but it’s not my favorite.
JW: Ok, imagine this: You get to spend a day in one of your favorite childhood books and with your favorite character(s). Which book would that be? Which character(s) would you hang out with? Will you suggest the activity for the day or leave it up to the book’s character(s)?


Elizabeth: This is funny, but I’d rather not spend the day with Nancy and Trixie.  I’d rather spend it in the 100 Acre Wood with Winnie-the-Pooh. I’d let Pooh decide what to do.  The sad thing is that I’d like so much just to do nothing, like he usually did…but it’s so very hard for me to sit still.  But I’d still really, really like to do nothing.
JW: Thanks so much, Elizabeth for letting me ask my questions. You’re still as authentic and awesome as you were when I first followed you.


Here’s a little more about Elizabeth and her books AND where you can buy them.

Elizabeth’s latest book, Quilt or Innocence, was released June 5. Elizabeth writes the Memphis Barbeque series for Penguin/Berkley (as Riley Adams), the Southern Quilting mysteries for Penguin/NAL, and the Myrtle Clover series for Midnight Ink and independently. She blogs at Mystery Writing is Murder.

Thank you, Elizabeth, for being my guest here today.


Questions for you all: Are you following Elizabeth? Who (author or title) were YOU reading or watching (on TV) when you were, let’s say, nine years old?  What is your favorite genre?