First of all if anyone from Denise Covey's Blogfest, October Ghost Story, traveled here to read my ghost story on October 31, um it was not here. EVEN though I signed up and wrote it, I couldn't edit it the way I wanted before it was due to be posted. I'm pretty sure I will post it on at JW or at The Ruralhood, at some point. TBA.  I should have waited and posted Friends and Séances, since it's a ghost story. Why didn't I? Does anyone know?

Sorry about that.
However, a really nice thing happened with Friends and Séances. Jerry Beuterbaugh, from As the Crackerhead Crumbles, offered up The Ruralhood as a blog to visit yesterday. It's like a virtual Sunday Drive post of which I think is brilliant.

About Writing
Sometimes, I watch those news magazine—crime documentary/shows, where they tell about a crime, give evidence, offer up suspects and often show the trial and its outcome.  Have you ever noticed how there are a lot of women--wives either disappearing or found murdered?  The husband is usually the first person they look at, as a suspect. (In my house, you should look at Millie. I mean--what IF the dog did it? Does anyone ever question those sweet faces?) When I discuss these cases with Dr. Lovely Daughter she nearly always says, “Divorce her, don’t kill her!” She's talking to the husbands, not me.
After watching shows about real life murder/mysteries, I conclude that if you are going to off your wife, here are some things to consider:
A. Do not keep five million texts on your cell phone from your lover. Not Cool!
2. Do not take out a large insurance policy on her just before she dies or disappears.
D. Practice your acting skills, before you dial 911, in a mirror or on a voice recorder.
(Remember when Buzz McAllister said that in the movie Home Alone? A., 2., D. Yes, that’s random, but I knew you’d want to know why my bullets are wacky. It’s because of Buzz McAllister.)
When I read or write a mystery, I sometimes catch myself thinking, would this even happen? If you ever doubt your story idea, whether it’s too off the wall or if he/she would do something like that, just stop what you’re doing and join Mr. Google for a “news” trip. Seemingly, normal people make wrong and criminal decisions all the time.
Where there are people, there will be crime!
Here's some help on writing it the mystery way:
How to Write a Terrific Murder Part I by Karen Woodward (2014)
How to Write a Terrific Murder Part II by Karen Woodward
15 Tips for Writing a Murder Mystery by Elizabeth Craig  (2011)
About My Son
Well it’s been five months since my 36 year old son had a stroke. I thought I should update you. THANK YOU ALL FOR CARING SO MUCH. He still has memory deficits, trouble with producing the right word and some motor skill issues, but if you didn’t know him, you wouldn’t suspect he had a brain bleed in May.
He went back to work, but has since had to modify his work hours. By the end of the workday, he was so tired that the aphasia returned. His wife had suggested going back part time, but he (or maybe the boss—I don’t know) went for fulltime.
About Millie
Millie is doing well, sometimes a brute and a bully, but mostly sweet and funny. I am working on a big dog story about her. TBA
She's still working on wearing clothing and—moving her body at the same time. 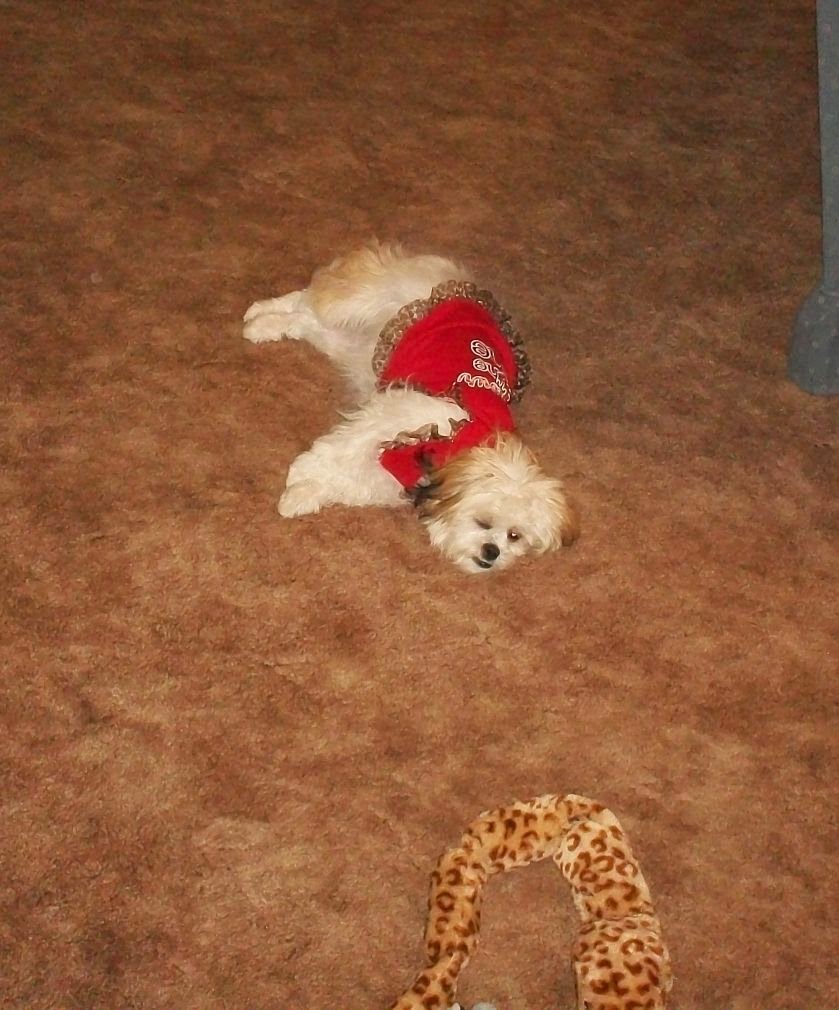 P.S. Dear Millie, I bought you a winter coat today. It's going to be a long paralyzing winter for you. (Picture to come.)
Email Post
Labels: JW and Millie JW on Writing JW's Family