I’ve been gone so long. I apologize, but I’ve not had much to say—blog wise, that is. I’ve been on summer vacation since the later part of June. Summer vacation means I’m supposed to catch up around the ruralhood, but the rain….

We’ve had rain. Lots of rain. How much rain? Welllll, rainy days and Mondays took on a new meaning. So much rain, that Noah called and asked if I wanted to reserve a seat on the Ark.

For now, we have a reprieve from rain in MO, enough to mow my yard, check on the flowers and my two tomato plants. Local news reported that some areas around me received 14 inches of rain. With that much rain there’s been crazy flooding. Even in a large city like Springfield, cars were trapped under water on streets, for goodness sake. Bennett Springs State Park’s wooden bridge was closed. This isn’t unusual during high volumes of rain, but it was still closed days after the rain had stopped. There was large tree debris that had washed down  river and caught up in the trees along the banks. The rushing, dirty water didn’t stop the fisher people either. Nope. They were out, in the moving water, waders and big smiles on and fishing with determination.

Most importantly, Millie’s potty routine was thrown off. She thinks she's a delicate flower and doesn’t like squishy grass beneath her feet.

I’ve been working on a couple of flower gardens, in between the raindrops that is.

Here's the "stump" garden. The petunias that I planted in the stump are even prettier, since I took this photo. I need to refresh the mulch, since the rain.

The rain created large Missouri ladybugs.
Below is the witches-circle garden. Don't ask! A running joke between my sister and myself. This is where my pool once sat. I would like to make a boardwalk through the middle, add more plantings next year, and make more whimsical things like a giant frog and maybe add a fairy garden or Gnomes or something. 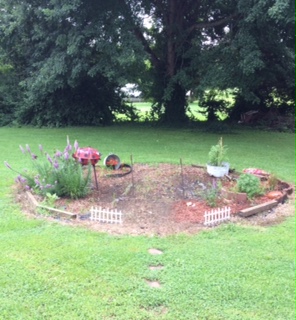 Below is what it looked like before the work. There is still much to do, but I think it looks better. 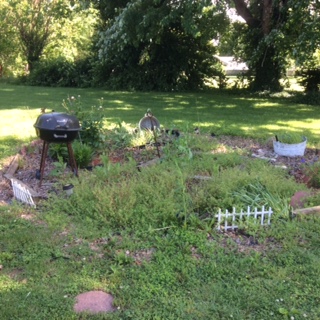 A few months back, I had the wall between my dining room and kitchen blown out (and a new chandelier installed over the dining table). You know an “open concept”, but of course now I need new flooring. It takes me FOREVER to research and to decide anything. In this case I need to choose what is best for my bank account and lifestyle for both dining and kitchen. Walls gone is a freedom I like. I recommend it. Even my son, who NEVER likes change, loves it.

Both my kiddos had birthdays. Their cakes were fire hazzards lit up like they were. When did my kids get so old?

Of course I’m still writing, working on short stories. The one consistent thing in my life is that I write.

Has it been rainy in your neck of the woods? How does your garden grow? Any house renovations?
Email Post
Labels: JW and Millie JW Around The House