and Wednesday will be my Saturday....after that I'm lost.


Now I will ramble some more...


Technology: This weekend I thought about when my Grandma Sadie was still upon the earth. In 1982 (when she passed) cell phones (here anyway) were not common. There was no Internets, no Twitter, no digital TV channels, no Skype, no web cameras, AND no computer viruses....


I got my first mobile phone in 1992. It was a big ole bag phone. I carried it to the grocery store with me to look cool. I hope no one took a picture of me flaunting my bag phone...I mean I don't have money enough to take that embarrassment away...me pretending to talk to someone.

In 1982, there was no WebMD. Instead I had a medical encyclopedia under my bed. 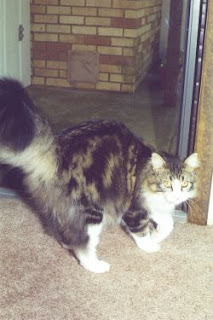 I had read it cover to cover. After that I would check it regularly as symptoms appeared (or so I imagined). Are you still wondering why my daughter went into psychology? Around 10 years ago, Chloe (my other cat, pictured on the right) dipped her big furry paw into my coffee that was sitting on my nightstand and spilled it all over the floor and the bed skirt. When I lifted the bed skirt, I discovered the medical encyclopedia, again. As I looked at that dusty white cover, I took a deep breath (and sneezed) then tossed it in the trash. What a relief. That book had held me hostage for years.


I can't imagine life without technology...especially since it is my job. But technology can also hold us hostage. Once in a while wouldn't it be great to take a break from it, technology?

One more thing: Moonshine - have you ever wondered about moonshine? Sunday Morning had a segment on the firey drink. As a child I always thought it would be exciting, while roaming the countryside, to happen upon a still. I'm thinking a storyline is coming to my brain. hmm. I knew about moonshine and stills from watching The Andy Griffith Show.


Anyhoo, I found out a couple of things about moonshining (is that a word?). 1. Moonshine stills were illegal. 2. They were "spirits produced and sold without tax by the light of the moon" (CBS, Sunday Morning, 2009) hence the phrase. 3. Made with corn (of course we knew that, huh?). 4. Was made into corn liquor, a type of whiskey. 5. There are still -stills - illegal stills. 6. But there are legal moonshine producers today, but doesn't that take the fun out of it? I mean in broad daylight...with the ok of the authorities? Shouldn't they call it Sunshine? And the reason I probably didn't find a still when roaming the countryside is because stills were more common, down south.

What are you thinking this Monday?