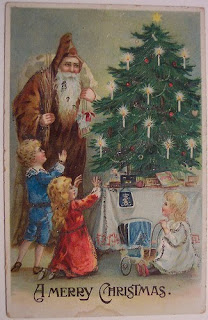 Sometimes as adults we play the game of Santa for our children. And sometimes as children we also play the Santa Game.


Honestly, I don't know when I stop believing in Santa Claus...if I ever did. I really don't ever remember believing in Santa as a person who lived at the North Pole, who measured my goodness vs. badness and wrote it down on a list allotting my share of gifts by that gauge. 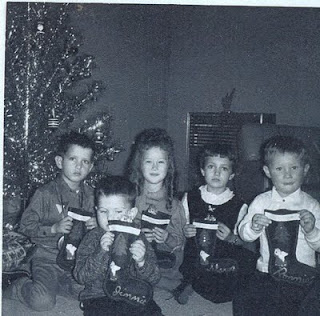 Maybe I didn't really believe in Santa because I think too much. (I've been told that.)
Or maybe early on I realized my Christmas gifts came from parents who always offered their children the best of Christmas celebrations with family and sometimes a neighbor or two.
Or maybe it didn't matter if Santa existed since I was raised that Jesus Christ was born to be my Savior. Maybe I didn't feel the need to believe in Santa since I had a great family and my faith. But, it was fun to play the Santa Game, so I played.

Like most parents, I too hyped up the existence of Santa. I now think my doing that was strange. But it was fun - then, I suppose.

As a child, when Santa was mentioned, I played along. I smiled politely. The Christmas, captured in these photos, was a good case in point.

One evening my family and I went to a neighbors (and friends) of my grandparents. Those neighbors had their niece and nephews there. Sharon, the little girl in the photo, was my age and we actually remained friends through high school.

Do you want to know what I do remember? I remember when it was my turn to jump on Santa's lap to tell him my wishes and wants for Christmas, I noticed something very disturbing about him. 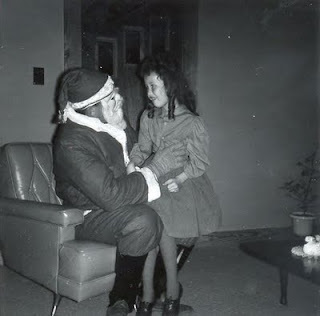 I was a little shocked.

I continued to play the Santa Game and delivered my politeness, but I was truly shocked. Then I looked into Santa's eyes one more time to be sure. Do you know what I realized? I realized that Santa was not Santa at all, but Sharon's dad.

That night, I watched as the others talked to him. I looked from one to another...child to Santa.

I started feeling sorry for his own children...that they didn't even recognize their own father, but instead thought he was Santa.

But was that true? I don't know because I kept that secret until the day I died...ok until now...or a couple of weeks ago when I shared it with Mary.

I continued to play the Santa game.... until I stopped. Do you see how I am?