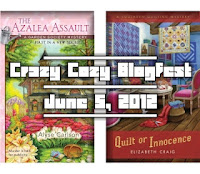 It gives me giggles that two of my blogger friends are cozying up (sorry had to say it) today to launch their new books and I'm going to help them launch. For this blogfest, I'm to pretend to create an idea for a cozy mystery of my own (I think).  I have no idea what I'm doing, so don't judge me unless I'm brilliant and then you MAY tell me.

I will call this my cover blurb. Then after my blurb, read on to learn about the new books and authors.

(I couldn't think of a title) by Me

Vivica would do anything to save Bygone Antiques—short of murder because she and her dead husband had started the business together. With the sale of the mall and her impending eviction looming, Vivica Bygone had a lot on her mind. When odd things started happening like an unclaimed sweating glass of ice on the counter in her shop and the toilet seat raised in the bathroom, Vivica should have reported her suspicion to the police. She believed someone was living in her store after hours. On the third day after the strange occurrences, Vivica arrived at her shop to find the police investigating the murder of the mall owner who happen to be lying on her floor.  Handcuffed nearby was the suspect. And if these things weren't disturbing enough what the suspect said to her made her knees weaken, “Hello, Mother, good to see you.” Vivica had only one problem with his statement, she had no children.

Now for the successful people!!

As the newest member of the Village Quilters Guild, Beatrice has a lot of gossip to catch up on—especially with the Patchwork Cottage quilt shop about to close. It seems that Judith, the landlord everyone loves to hate, wants to raise the rent, despite being a quilter herself… But when Judith is found dead, the harmless gossip becomes an intricate patchwork of mischievous motives. And it’s up to Beatrice’s expert eye to decipher the pattern and catch the killer, before her life gets sewn up for good.


**********
Elizabeth Spann Craig writes the Memphis Barbeque series for Penguin/Berkley (as Riley Adams), the Southern Quilting mysteries (2012) for Penguin/NAL, and the Myrtle Clover series for Midnight Ink. She blogs daily at Mystery Writing is Murder, which was named by Writer’s Digest as one of the 101 Best Websites for Writers for 2010, 2011, and 2012. Her books include Her most recent releases are Finger Lickin’ Dead, the second of the Memphis Barbeque series (June 2011 for Penguin), Progressive Dinner Deadly a Myrtle Clover Mystery (August 2011), Hickory Smoked Homicide (a November 2011 release), and A Dyeing Shame a Myrtle Clover mystery (December 2011). Her next release is Quilt or Innocence, on June 5, 2012--the first of the Southern Quilting mysteries.


You can buy Quilt or Innocence here.

Camellia Harris has achieved a coup in the PR world. The premier national magazine for garden lovers has agreed to feature one of Roanoke’s most spectacular gardens in its pages—and world-famous photographer Jean-Jacques Georges is going to shoot the spread. But at the welcoming party, Jean-Jacques insults several guests, complains that flowers are boring, and gooses almost every woman in the room. When a body is found the next morning, sprawled across the azaleas, it’s almost no surprise that the victim is Jean-Jacques.  With Cam’s brother-in-law blamed for the crime—and her reporter boyfriend, Rob, wanting the scoop—Cam decides to use her skills to solve the murder. Luckily a PR pro like Cam knows how to be nosy.
**********
Hart Johnson writes main stream suspense for adult and YA along with cozy mysteries. Hart writes under the pen name of Alyse Carlson for her debut novel The Azalea Assault; A Garden Society Mystery series, with Berkley Prime Crime, due out June 5, 2012. Her new series has a gardening theme and takes place in Roanoke Virginia. The second and third installment of this series is coming!!!  Hart blogs on Confessions of a Watery Tart regularly.
You can buy The Azalea Assault here.
Are you following Elizabeth? Hart aka Alyse?  Don't you think their titles are clever? What would you recommend for my faux cozy mystery title?﻿