Today marks the debut of  Friday’s Interesting People (FIP) series on Journaling Woman. I'm so excited to have as my first guest and author Hart Johnson with her debut book, The Azalea Assault. Welcome, Hart.


JW: As a Writer, how or where did you get the idea for The Azalea Assault?


Hart: This is where I confess that I came to this Cozy Mystery thing completely sideways. Cozy mystery is such a HUGE seller, that editors come up with 'profiles' of series they think there is a definite market for and they seek writers. I found out the about the opportunity through a friend of mine and then went through an audition process. Already specified were the location (Roanoke Virginia), the theme (gardening) and about a dozen characters (with single line descriptors—usually job or relationship to the MC). There was another up for audition at the same time that involved books and chocolate, and if you can believe it, I chose THIS one to put my efforts toward.  The reason:  my first degree was journalism, so a main character who worked PR and her boyfriend the reporter really spoke to me as characters. I had a really solid feel for them right away, not to mention the FUN I've had with the friendship between Cam and Annie—her BFF.

JW: You wrote The Azalea Assault under the pen name Alyse Carlson. Why?

Hart: Cozy Mystery has a tight set of rules and a readership with very specific (very PG) expectations. They ask ANY author who doesn't have an established reputation as a Cozy author to use a pen name because they want to protect the genre from... oh, I don't know... people who might run around naked *shifty* The name I chose is the first name of one grandmother and the maiden name of the other. I feel like the two of them always made me feel invincible, and to make it in publishing, that is really how you need to feel.
JW: Plotter or pantster?

Hart: Normally I am more a TIMELINER (which is between—just major events noted but lots of wiggle room between them), but this particular book I story boarded and it was GREAT. Mysteries have more careful plotting and pacing , so on a big white board I wrote out my DAYS and the big background events, then I wrote all my clues (both real and herring) on post its and spread them so they came out nicely (and I could move them if necessary).

Hart: I work full time. (oh, for the day that isn't necessary)  So when I am writing, I write about two hours every night, and by every, I mean EVERY. I maybe have one day a month I take a break. No more.  Editing I can do a little bit more time because I can add my commute time to that so I get in almost four hours a day.

JW: Get into your MC’s mind. There is something that your MC does not want others to know about her. What is that secret?

Hart: She craves acceptance. The people she loves most don't really care what society thinks. Cam does, but she knows they wouldn't really approve of her need for approval, so she tries to keep in under wraps.

JW: Any new books in the works?

Hart: I am on the penultimate draft of the third in this gardening series (it goes to my DETAIL readers next (actually, should BE there by post time), then final polish, then to my editor June 30) And I am doing BuNoWriMo this month with my writing group and 100 of our closest friends—it is a lot like NaNoWriMo, but smaller and more intimate—this is our 3rd year and I LOVE it. So the one I'm writing is a flu-based Armageddon conspiracy...

JW: Ok let’s talk about your childhood. A dog, a cat or an imaginary friend?
Hart: I was the rare kid with THREE imaginary friends: Day Day, Mare Mare, and Lare. They were apparently good company. (I am an only child and I hear onlies are the most likely to have imaginary friends, but I was a rare duck to have more than one)--always loved animals, but when I was really little, we couldn't have them (in rentals).

Hart:   I had moments of all, though probably follower the least.  It depended on the context and company... and a lot on my age. I was insecure until I was about 17, so though I had friends, I tended to be quiet and in GROUPS shy. But I also had really VARIED friends, which gave me a lot more resilience than much of my primary clique. In pairs I could be bossy. I have always been content to be alone some. And then I finally found my comfort zone (accepting I didn't NEED to fit the mold others were working with) and through the rest of high school and college I sort of found comfort leading (sometimes to 'the right' stuff, sometimes to trouble)

JW: What did you believe, as a child, that you found out later was incorrect?
Hart: That eventually I would know what I was doing. There is an illusion kids are under that adults know what's going on. And maybe I am a rare bird, but most of the time I feel like anyone with the answers is really a fraud. I'm not buying it anymore. Nobody knows what's going on.
JW: I’m full of randomness so answer me this, neat handwriting or “I should have been a physician” handwriting?
Hart: Oh, it's lousy! I'm the only one who can read it. (on the plus side, I can READ anything—gimme your worst—I can decipher it. (this was hard won through several bosses and a few years in a restaurant kitchen having to read the writing of 'boys').

JW: Imagine this: You’re in the witness protection program. You get to choose your new name and your imaginary past. What is it?

Hart: SPY!  Wait. No. That is probably frown on in witness protection. I would be Naomi... mmmm single syllable... Pierce maybe? Or is that a real person?  Naomi Pierce sounds good though. And I'd be … has to be plausible, I guess... probably data manager, which I've BEEN, but which I could change my domain enough that I could both pass the test but not be found.

JW: If you could be any character in any book (for a day) who would that be and why?
Hart: Minerva McGonagall. I think that woman knew EVERYTHING that went on in that school and had an excellent sense of perspective (and humor).
JW: Do you tell people (you know) you’re a writer? Or is it a secret?
Hart: I'm out.  I guess NOW, I'm REALLY out. My husband keeps telling strangers when we meet them. But I began admitting it about the time I started blogging three years ago. I'd only completed one book at the time, but I figured that whole platform thing was something I could use the support of friends on.  I'm not really shy about asking for help. I mean I'd never beg people to go BUY (as I have often enough not had money, so don't want to put people in an awkward spot) but I DO beg for likes and follows and such. I figure it all helps to making it look like I actually know what I'm doing. I also found once I started admitting it, I started MEETING writers, and that is a GREAT support.

Teresa, thank you so much for having me! It was a really fun set of questions and I enjoyed answering them!

JW: THANK YOU, Hart!  It was fun getting to know you better.  Now, here's  information about The Azalea Assault! 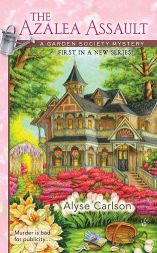 Camellia Harris has achieved a coup in the PR world. The premier national magazine for garden lovers has agreed to feature one of Roanoke’s most spectacular gardens in its pages—and world-famous photographer Jean-Jacques Georges is going to shoot the spread. But at the welcoming party, Jean-Jacques insults several guests, complains that flowers are boring, and gooses almost every woman in the room. When a body is found the next morning, sprawled across the azaleas, it’s almost no surprise that the victim is Jean-Jacques. With Cam’s brother-in-law blamed for the crime—and her reporter boyfriend, Rob, wanting the scoop—Cam decides to use her skills to solve the murder. Luckily a PR pro like Cam knows how to be nosy.

Hart Johnson writes main stream suspense for adult and YA along with cozy mysteries. Hart writes under the pen name of Alyse Carlson for her debut novel The Azalea Assault; A Garden Society Mystery series, with Berkley Prime Crime, June 5, 2012. Her new series has a gardening theme and takes place in Roanoke Virginia. The second and third installment of this series is coming!!! Hart blogs on Confessions of a Watery Tart regularly.


You can buy The Azalea Assault here.


Are you following Hart? What's your favorite genre to read? If you could choose a pen name, what would that be?
Email Post
Labels: JW's Friday's Interesting People