You heard me! Not Men in Black, not Men in Trees, not men in overalls, not men in tights (although that would be interesting here in the Midwest) but, this weekend I saw men in skirts. I spent some time at the annual Celtic Festival. The men were actually in kilts.
There were many different clans attending, which I know little about. I am Irish but the only clan I am aware of is my own. And I promise you I have never seen any of the men in my family wear skirts, yet. I'm just saying. 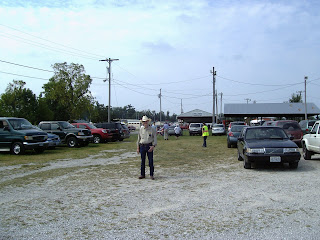 I saw Artsy Dad helping with traffic control. It was getting hot by then. Dad is a member of the Sheriff's Posse. I gave him my bottle of water then set off to find "the sister".

Shepherdess Woman set up a display with three of her Shetland Sheep. She had put together a booth with her wool products. I won't go into much detail as she will blog more professionally about it at a later date. But I will say, how excited people were about her sheep and her business. Some said, they wanted sheep. Some wondered, if they wanted sheep. Others just lived through SW's experience. 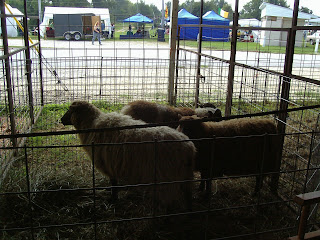 I took a photo from the outside of the pavilion. It was too dark and is not included. I took this one of the three little sheep she brought with her and it is too dark. You can't see their beauty or darling faces. They did very well.

SW really knows her business. I always enjoy listening to her share her knowledge of raising sheep with other people. 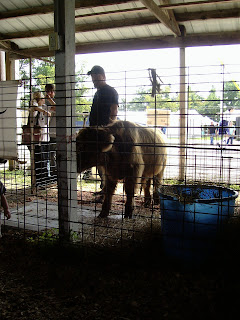 This was a long haired cow (not politically correct term) next to SW's space. He looked like a teddy bear. Very pretty. He had red hair, like many in my clan (sorry couldn't resist). You can't see him either in this too dark photo. Are you wondering if JW can take a good picture to save her life? Well here it is... 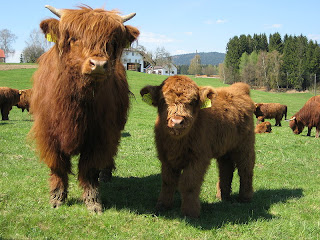 Just kidding. Not my photo. But, I think this was the breed. A picture courtesy of :
http://commons.wikimedia.org/wiki/File:Highland_Cattle_2.jpg Aren't they cute? 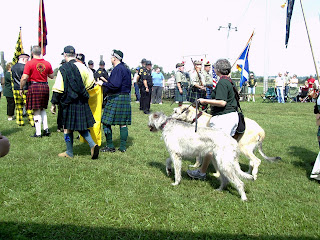 Now we are coming to my favorite part..........the Irish Wolfhounds. Come on admit it, YOU thought that Journaling Woman was going to say "Men in Skirts". These two (the dogs) were most adorable. JW has never been in the presence of such large dogs. They were even larger than Boone, SW's dog.

I should mention that the men in kilts, with law enforcement and other dignitaries marched in a small parade to this area. Then there was a ceremony. But with my attention span, I didn't stay focused on it, so I don't know what they did. (Seriously, I need to get medication for my ADD.) 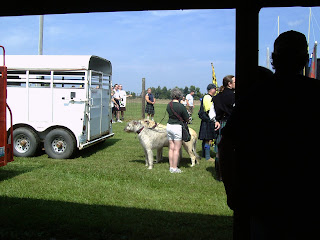 The Irish Wolfhounds patiently posed for photo taking. They let anyone and everyone pat their big heads. The owner said that the younger one, now 3 years old was a rescue dog and that he had been in 5 previous homes. She had decided to keep him. I'm glad aren't you? Every person and pet should have a permanent home. (He is the one closest to you in the photo and the younger of the two.) 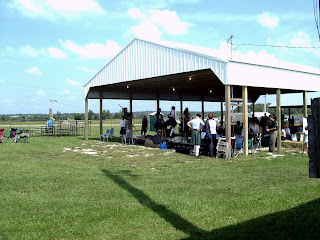 There were bands and bagpipes playing and Celtic dancing. Very interesting. There were vendors, booths with clan history, sword fights and men in skirts. BTW (by the way) as I walked around and viewed the product for sale, I saw a t-shirt that more or less warned against calling the kilts a skirt. Just wanted to tell you...warn you... before you made that mistake. And I want to apologize to those who take their kilts seriously and will try very hard to never call them skirts again. Some men, I must say, looked good in their kilts, but others....ummm.


Last year was my first experience attending the Celtic Festival. Community gatherings are a wonderful way to see your neighbors...people that you haven't seen in awhile. Lots of hugs and big smiles and holding babies.....small town...big in spirit.

Wish you had been there!