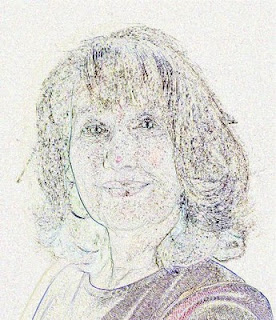 I came out of the aisle a little too fast and nearly ran into him at the small grocery store. He didn't seem to see me or our near collision. He just walked on by.

His clothes were dirty.

His hair was big and wild.

I had to look for something at the end of the aisle, but, I tried not to get to close.

"Uh huh, uh huh," he chanted. "I can't help it." Then he moved on talking to himself. Eyes stared straight ahead.

We've seen people with mental illness behave like this in public or at least I have. Sometimes we turn away because...they are scary...sometimes...we are disgusted. And we don't know what to do.

This man made me nervous… a little. He didn't seem to acknowledge anyone around him. And he had a can in his hand. But actually...

hidden in his wild hair was a Bluetooth device that I saw later. Once again, I assumed something different than the reality.

Sometimes we assume the worst about people. Sometimes we are totally judging the wrong thing. Is that fair? Is that love?

"If you judge people, you have no time to love them." ~Mother Teresa said.

The right way to serve others is to satisfy the heart...not the mind. It's difficult...sometimes...to look past the surface. But who are we to cast that first stone? Who are we to say you are poor and I am better? Who are we to say you are different, not like me, I am better? Who am I? None better than another.
"Teacher, which is the greatest commandment in the Law?"
Jesus replied: " 'Love the Lord your God with all your heart and with all your soul and with all your mind.' This is the first and greatest commandment.
And the second is like it: 'Love your neighbor as yourself.'
All the Law and the Prophets hang on these two commandments." Matthew 22:36-40

Love is not.... turning away, being critical, or unforgiving. Real love from person to person should be...could be unconditional....should be loving.
Judging or loving? Those are my choices today.
To answer my own question: Why can't everyone be like me? Well my goodness it's because it is better that way.
Oh and for something fun to read, go check out the story at Something She Wrote. She put out a little exercise... a little challenge...to contribute to a story from an idea. Then Janna put it all together as a story. She went to a lot of trouble. It was so much fun. I contributed twice. My pride will tell you that I was the first contributor. My first part starts with "Had I been here before?" and ends with "I needed to watch". I also have a blurb later. It was so much fun.
Email Post
Labels: JW's Wednesday Inspired