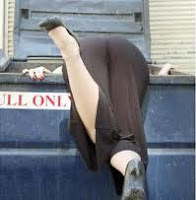 I put my trash to the end of my driveway like everyone else. I do this Monday afternoon to be picked up Tuesday. You need to know this information and my feelings about trash to bring this story to fruition.

My feelings about waste and wants:

1. I think we (the people) generate too much waste. (Have you noticed that animals don’t waste things, except my Yorkie - Tiki who loved unrolling toilet paper and dragging it through the house and shredding it and expecting us to use it after? I’m making that last part up.)

2. If I want something new for my house, I give auditions to “used” stuff first. (Yes, the prettiest, curviest, and oldest will probably get the job.  Imagine that--reversed ageism.)

3. I don’t want to fill up the landfill with my stuff…if someone else can give my discarded—new life.  I’m for that. (Paint, glue, or hugs and kisses—I don’t care.)

Remember the rickety chairs from my dining room that I replaced? Last week, I put them alongside my trashcan, displayed in quite a lovely manner--secretly hoping someone (in the darkness of night or boldness of day) would rescue them.  This has happened before, my trash disappearing (not trashy trash) from the roadside before the morning light. This makes me happy and probably weird.  I don’t want things going to the dump if someone can use them. But, these were scary chairs and I didn’t want to give them to someone voluntarily.

The next morning they were still at the end of my driveway.

At fifteen to eight, I was out the door going to work and noticed a nice red pickup truck stopped in the middle of the road (yes that’s how we park here). With hands in his pockets, he circled the chairs multiple times. I’m not sure why, but I didn’t want to embarrass him, so I ignored him until I pulled to the end of my driveway. It was then I decided to have a conversation with him so he could stop circling.

“Are you getting rid of these?” he said. “I didn’t want to just take them.”

I put my "duh" look back in my attitude arsenal and said, "You’re welcome to them, but they’re rickety. I couldn’t get them glued properly but you might be able to."

He gave me a pity look, you know--poor little woman who can’t glue a chair properly and must throw them away. I opened my mouth to start singing Helen Reddy’s (and my theme) song, I am woman hear me roar in numbers too big to ignore… but decided against it.

He still had his hands in his pockets when he said, “My wife passed by and phoned me to stop and look at them.”

I wanted to say, "Do you always jump when your wife speaks?" but instead I said again, “You’re welcome to them.”

He thanked me. I nodded (and thanked him in my mind for relieving my guilt feelings of dumping perfectly good broken down chairs at the end of my driveway).

1. Is it still called dumpster diving when the trash receptacle is 4 foot by maybe 2 foot and the trash is alongside it?

2. I love the word rickety.

3. And I really need to get to know my neighbors. However, I've only lived here 33 years. I have time.

Come on admit it, have you ever picked up someones trash and made it your treasure?  What was it? I picked up an old table from my neighbor's trash, but I called first and ask. I hope that counts.