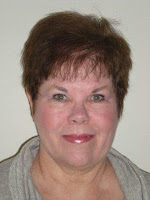 Today, I would like to welcome Carol Kilgore as another FIP on Journaling Woman. Carol blogs at Under the Tiki Hut and is joining other authors this summer in launching a new read, her debut book titled In Name Only.

Let's find out why I think Carol is interesting.

JW: How long have you been writing? And what do you write?
Carol: Before I answer, I want to thank you, Teresa, for including me as one of Friday's Interesting People. I'm excited to be here!

While I'm not one of the writers who's been writing since childhood, I have had stories in my head since I was a little girl. It just took me a while to figure out I was supposed to write them down. I started taking a serious look at writing in 1999.  I've freelanced with non-fiction and had some success with short stories, one of them winning a Derringer Award. But they didn't give me the personal satisfaction I needed. I found what I was seeking with novels. IN NAME ONLY is not the first novel I've written, but it is the first one I've published. My novels are a blend of mystery, suspense, and romance. I call what I write Crime Fiction with a Kiss.

JW: Why did you decide to write a book?

Carol: That's easy—to find out what how the story would end. (JW: And this is why I like this girl. Is she my sister?)

JW: There are juicy rumors that you have a new release coming up—like now? In a sentence tell us the name of your new book and a little about it.

Carol: IN NAME ONLY is about a woman trapped inside the Federal Witness Security Program and how she fights back.

Carol: I had to stop laughing before I could answer this. I set my writing schedule aside a few weeks ago to focus on book publishing and promotion details. But in another week or two, I hope to return to my regular routine, which is subject to change at any moment. My life is hectic and my brain continues to try to sabotage my best laid plans. Currently a regular day goes something like this.
I'm not a morning person, so I set the alarm for 7:00, get coffee, and write for one hour. I use a timer. I'm still half asleep, and for the most part, the words flow with little real thought. At the end of the hour, I walk for a half hour or so. I wander and sometimes stop to chat with a neighbor. While I walk, I think about what I've written and what I want to write next. The walking time is wonderful—it re-energizes my creative energy. I come home, pour a second cup of coffee, and write for another hour. When the timer dings, I finish the sentence I'm writing and stop. I immediately make notes about what comes next. My goal in these two hours is 2000 words. Sometimes I make it, sometimes not. I don't beat myself up. When I start hitting the goal consistently, I'll raise it. My overall goal for the year is to increase my writing speed.

I do other writing-related tasks throughout the day. At night while I'm cleaning off my desk, I think about the story, especially any problems. I also think about what I want to cover the next day. I often add to my notes from the morning.

JW: What’s the craziest way you found an idea to write about?

Carol: If the character doesn't just appear one day, the way they take shape for me is usually a little off center. So I'll choose a story about one of the characters from IN NAME ONLY. Her name is Maxie Lamar. Maxie first came to me in a dream. In the way of dreams, not everything made logical sense. I was looking into an ornate mirror in a dark hallway. The walls were dark red. Another woman appeared in the mirror before I felt her standing close behind me. She was older, with her longish silver bob partially covered by a maroon cloche hat. Her wool suit was the same color. She pulled a big gun from a small clutch and said I didn't have a choice, that I had to do it. Her accent was European, and she was very threatening. I had never seen her before and had no idea what she was talking about. I woke up, but the character stayed with me. You'll have to read IN NAME ONLY to see how Maxie turned out.

JW: What is your next writing project?

Carol: The next book I'll publish is titled SOLOMON'S COMPASS. It's written and edited, and I hope to have it available by April, 2013. In it, U.S. Coast Guard Commander, Taylor Campbell returns to the Texas coast to deal with her uncle's estate, but the mysterious Jake Solomon knows she's the killer's next target.
My current WIP is AMAZING GRACIE, and it will be the first in a series about San Antonio Police Detective Grace Hofner. Although Gracie is a law enforcement officer, this is not a police procedural. In AMAZING GRACIE, Gracie is working an undercover assignment in a restaurant kitchen. The first thing that came to me about this story was the log line: Miss Congeniality meets the Iron Chef.

JW: Carol, I want you to go back to your childhood and answer this question. Other than real friends, did you have a dog, a cat or an imaginary friend as your bud?

Carol: My first dog was Kiki. Then came Queenie, and then Little Bit. Cats were Meow and Katie. My imaginary friends lived in the backseat of my parents' car. They were tiny little people, and they rarely left the floor to come to the seat. They were there whenever I was, and they were my friends. I didn't know about Gulliver's Travels at this point.

JW: Ok, imagine this, you’re walking to school. Who from this list would you choose to walk with you and why: Winnie the Pooh, Dorothy (of Oz), Harry Potter?

Carol: Definitely NOT Dorothy. The Wizard of Oz always freaked me out. I don't think I've ever watched it all the way through. But I'd love to walk with Pooh and Harry Potter. Imagine the great adventures we'd have!

Carol: I was the most naïve and gullible creature ever created for many years. So this answer would be way too long. I don't even know where to begin.

JW: Now a little randomness. Ok, imagine this too: You’re in the witness protection program. You get to choose your new identity, name, and your imaginary past. Even though you shouldn’t tell us all about it, do!

Carol: Oooh! A new me. I would probably work in a shop or an office – someplace I could blend in and be anonymous. The same with my name. I wouldn't want it to stand out. Susan, Melissa, Jennifer – all the names that sound like everyone's best friend or worst enemy. Last name would not be as simple as Smith or Jones, but a rung or two above. Parker, Davidson, something middle-American. I would be in the program because I saw a crime occur and the perpetrator saw me. I would definitely learn self-defense and have a concealed carry permit. And as a minor side note, I would be totally paranoid.


JW: Thanks, Carol! Now, here's more about In Name Only:

No home. No family. No place to hide. For Summer Newcombe, that's only the beginning.


The night Summer escapes from a burning Padre Island eatery and discovers the arsonist is stalking her, is the same night she meets Fire Captain Gabriel Duran. As much as she's attracted to Gabe, five years in the Federal Witness Security Program because of her father’s testimony against a mob boss have taught her the importance of being alone and invisible.


No matter how much she yearns for a real home, Summer relinquished that option the night she killed the man who murdered her father. But Gabe breaks down her guard and places both of them in danger. Summer has vowed never to kill again, but she's frantic she'll cost Gabe his life unless she stops running and fights for the future she wants with the man she loves.

estions for YOU: Do you follow Carol? Who would you walk to school with? Is white chocolate really chocolate?