I ate a box of Cracker Jack.

Not every day, but the other day, I ate a box of Cracker Jack.  And if I eat one box, I really want another.
The prizes aren’t what they used to be in Cracker Jack.
If you’re as old I am, you might remember when Cracker Jack gave out toy prizes like tiny plastic baby dolls and guns, miniature books that you could read, and a single plastic shoe (charm). And it wasn't that long ago that the consumer could look forward to a free tattoo prize from Cracker Jack. Those tattoos rocked. When you pulled out a tattoo, you had something to hang onto, or rather; it hung onto you unless it got wet. I miss the days of interesting prizes: tattoos and cheap plastic toys.
Do you know what I miss more than tattoos and cheap plastic toys? The rings.
When I was in 6th grade and popular (before school-consolidation) compared to 7th grade and unpopular (after school consolidation), my 5th grade boyfriend (are you following me?) ate a box of Cracker Jacks at recess. His prize was—a ring.
The ruby ring was set in gold (something) with an adjustable band. My boyfriend sneered at it, saying something like, “It’s a girl’s ring.”
Like the budding woman I was, I grabbed it straight from his hand and said, “I want it.”
“Have it!” he said, surrendering, but probably wishing he’d gotten a loaded miniature plastic gun to--well we won't say what.
I adjusted the band to fit my ring finger, on my left hand and slipped it on. Then I held my hand in the air, waved it in front of his face and announced, “We’re engaged.
His friends slapped him on the back and razzed him about—having a girlfriend. My friends giggled. He just stared at me, or more like glared at me. I took his silence as a proposal.
After a couple of days of wearing my dazzling ring, the gold flaked off the band and it finally broke in two pieces. Before the school year ended, our (one sided) engagement was off.
My recent prize? A Cracker Jack sticker of Sailor Jack and his dog Bingo (I think)! I tried wrapping it around my ring finger, but it just wasn’t the same. So I stuck it on my desk at work. 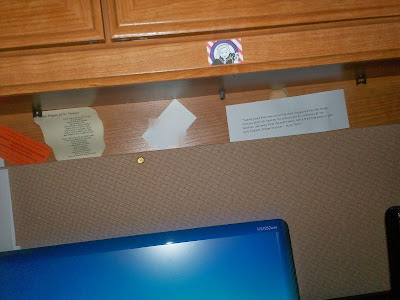 The answer is no, I didn't find a tiny bottle of wine (prize) and drink it before I shot this photo. It just came out crooked because...we had an earthquake as I was shooting it. J Not really.
Do you have a favorite Cracker Jack prize?
Email Post

Elizabeth Spann Craig said…
I haven't had a Cracker Jack box for many years! But I remember loving them. I loved the rings, too, but sometimes even in the 70s they had tattoos. I was a little worried about the tattoos at the time and wondered if the ink would come off or if I'd be tattooed for life at age 7...:)
October 2, 2013 at 4:39 AM

Daniel Efosa Uyi said…
hey nice post meh, I love your style of blogging here. this post reminded me of an equally interesting post that I read some time ago on Daniel Uyi's blog: In Front Of A Girl .
keep up the good work friend. I will be back to read more of your posts.

Michelle Wallace said…
It reminds me of those long-ago Lucky Dip packets! They used to have those tiny, hard, delicate flavoured pink and white sweets called cachous (I think) and a novelty toy, usually a miniature ring or toy gun...
October 2, 2013 at 7:10 AM

JoJo said…
I would give anything to still have all the cracker jack prizes I had from the 70s. What cracks me up is that Kinder Surprise Eggs are illegal in the USA b/c the alleged 'toy' and 'plastic pod' are considered choking hazards but Cracker Jack prizes are fine.
October 2, 2013 at 7:57 AM

Alex J. Cavanaugh said…
I'll buy the earthquake story.
I remember when the prizes were something of substance. Just like prizes in boxes of cereal.
October 2, 2013 at 8:15 AM

Chris Desson said…
The tiny compass. I would make maps and use that tiny plastic compass to find the buried treasure. Wow. That seems so long ago. *wipes mist from eyes.
October 2, 2013 at 8:26 AM

Hilary Melton-Butcher said…
Hi Teresa .. I think we had toys in Kelloggs Cornflakes .. but I was too old by then - so the only ones I ever get now are at Christmas from the crackers .. some are quite useful ... sewing kit (tiny!), keyring, tapemeasure .. etc

Joylene Nowell Butler said…
Teresa, I loved this story! I can just see you dazzling the crowd with that fancy ring. Cracker Jacks... strange I can't remember any toys. Except I think mine were mostly stuff my brother liked. Don't recall any rings. Too many years have passed. Thanks for bringing back the memory.
October 2, 2013 at 10:30 AM

David P. King said…
I can't remember the last time I had one of those, but they were kinda dry and meh ... and I think I came too late on the scene for the really cool prizes. They've always been stickers or tattoos for me. :)
October 2, 2013 at 10:35 AM

Lynn Proctor said…
i love this! every time i think of cracker jacks, i remember the scene from the first movie "the out of towners'---jack lemmon and sandy dennis--hilarious movie---he finds a box of them and bites down on a whistle--of course he breaks his front tooth!
October 2, 2013 at 10:51 AM

cleemckenzie said…
I think I still have one of those rings in my "junk" drawer. I should remove it and put it in a place of more respect! I'm back from my Sept. break and it's great to be here and read your post today.
October 2, 2013 at 12:00 PM

Crystal Collier said…
LOL! I hated Cracker Jacks, but the prizes were stellar. Oh my goodness, the things this rising generation is missing, eh?
October 2, 2013 at 4:12 PM

writing and living by Richard P Hughes said…
Well, back in the fifties, when I was a kid, I looked forward to the prizes too. Then, as I got older, I saw that the prizes were very cheap. At least the popcorn was still good (I guess it still is; it's been a long time ago).
October 2, 2013 at 4:37 PM

Susan Gourley/Kelley said…
I loved those old prizes. Rings, whistles and other cool things. The prizes now are lame but the popcorn is still good.
October 2, 2013 at 4:40 PM

Arlee Bird said…
Those prizes are certainly not what they used to be. My favorites were the little magnifying glasses and those 3-D pictures that were animated when you moved them. I got some Cracker Jacks a few months ago and they were terrible. Maybe they were old or something, but they just weren't like I remembered them. Fiddle Faddle and Poppycock are much better I think. Not the same flavor, but seems like better quality stuff. And I used to love Cracker Jack.

Carol Kilgore said…
You're so funny! I always wanted Cracker Jacks. Mom said, 'You don't like them.' I said I did, but all I really wanted the prize. And every time, my prize was always really cheezy and boyish. I wanted the rings and charms.
October 2, 2013 at 6:15 PM

Gail said…
I loved Cracker Jack Prizes...anything was good. It was a prize!!!!

Deb Shucka said…
I love this story! Haven't thought about Cracker Jacks for years. I loved the little books that showed up from time to time. It's too bad there aren't more prizes hidden in products these days. Those small bits of joy went a long way.
October 6, 2013 at 1:02 PM