Still loving it!!
I know you're tired of hearing about my redos, but I love love love my new yellow kitchen. How bright and cheery it is compared to the brownish wallpaper that was there previously. Three long weeks, but, the result is pleasing. I still need to scrape and wash stuff off some of the trim. And I need to work on the other part of the kitchen. But first…

I bought gray paint to paint my main bathroom.

Work
I started training my replacement last week—half days. It has worn me down to bare threads. I’m not use to talking that much at work. My voice became hoarse and I was so tired in the evenings. I met with a principal and an assistant about the new job. I talked again with the resource officer. Whew. Will I live through this? Will I survive to see my 29th birthday again? This time next year, will I still have thick hair or will I start pulling? Will I have to amp up my dye jobs for root control? These are all questions heavy on my mind.

Movie
I watched a movie this weekend

I watched The Karate Kid starring Jaden Smith and Jackie Chan. I am very critical of movies and rarely like them enough to recommend them. But, here I am recommending you see The Karate Kid.

The movie has so many things I liked.

The movie will get a 5 rating from me and that’s super rare. It has some violence. It has emotion. The movie is long, but you don’t feel like it is. I can’t remember if it had "language". If it did it must have fit in perfectly with the story, because I don’t remember them. There was no yawning or longing for it to end. However, I didn’t like the mother character.

The Karate Kid is a good entertainment.

My Other Blog
The Ruralhood... has a new post on one of my grandmothers, if you are interested.

Furry Friends
October was the one year anniversary of my dear little China cat passing. I miss her. Instead of meowing, she quacked like a duck. This is how she came to live with me.

In 1997, I found a newborn kitten abandoned by its feral mother. (Hang on, this wasn’t China.) I bottle fed it and was going to find it a home when she didn’t need me anymore, but I became attached and kept her. That was Chloe. Someone at work told me it was wrong to have only one cat and that Chloe needed a friend. I hadn’t caught Chloe’s mother yet (for spaying) and she had kittens again. I captured Smokey that year, chose one of her kittens—and named her China because as a baby she looked like a china figurine. I brought her in the house so Chloe would not be alone. They were sisters after all. But, they never liked each other—ever. I think it was because Chloe felt she was not a cat, and that I had gotten her a kitten and frankly she didn’t want a kitten. China became jealous of Chloe and the battle was on. But they were both my kitties and I loved them. 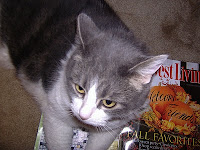 In honor of China’s life, I want to tell a funny (but not to her) story.
China liked hiding under and behind things. My daughter was still living at home and we had been gone all day. When we came in the house that day, I called for China. Nothing. So I called again and heard her muffled meowing from somewhere, but I couldn’t tell from where. She kept meowing and I became alarmed.Why was she hiding?  Had something disturbed her? I kept heading toward her feline cry and finally found her behind a couch in the living room. I called her to come to me, but she just lay on the floor and cried. Finally, I realized my pudgy China was wedged between the wall and the couch.

I’ve always heard that if a cat can fit her head through an opening, she can fit the rest of her body through too. I guess that isn't true. Or, I'm guessing her head was too small or her body too big for that rule. I pulled the couch out and she was free and not hurt, except for her feelings.

Chloe died in 2004 and China last year in 2009. I think China missed Chloe after she died even though they quarreled. I will always remember them...Chloe's mischievous ways and China's quacking meow.